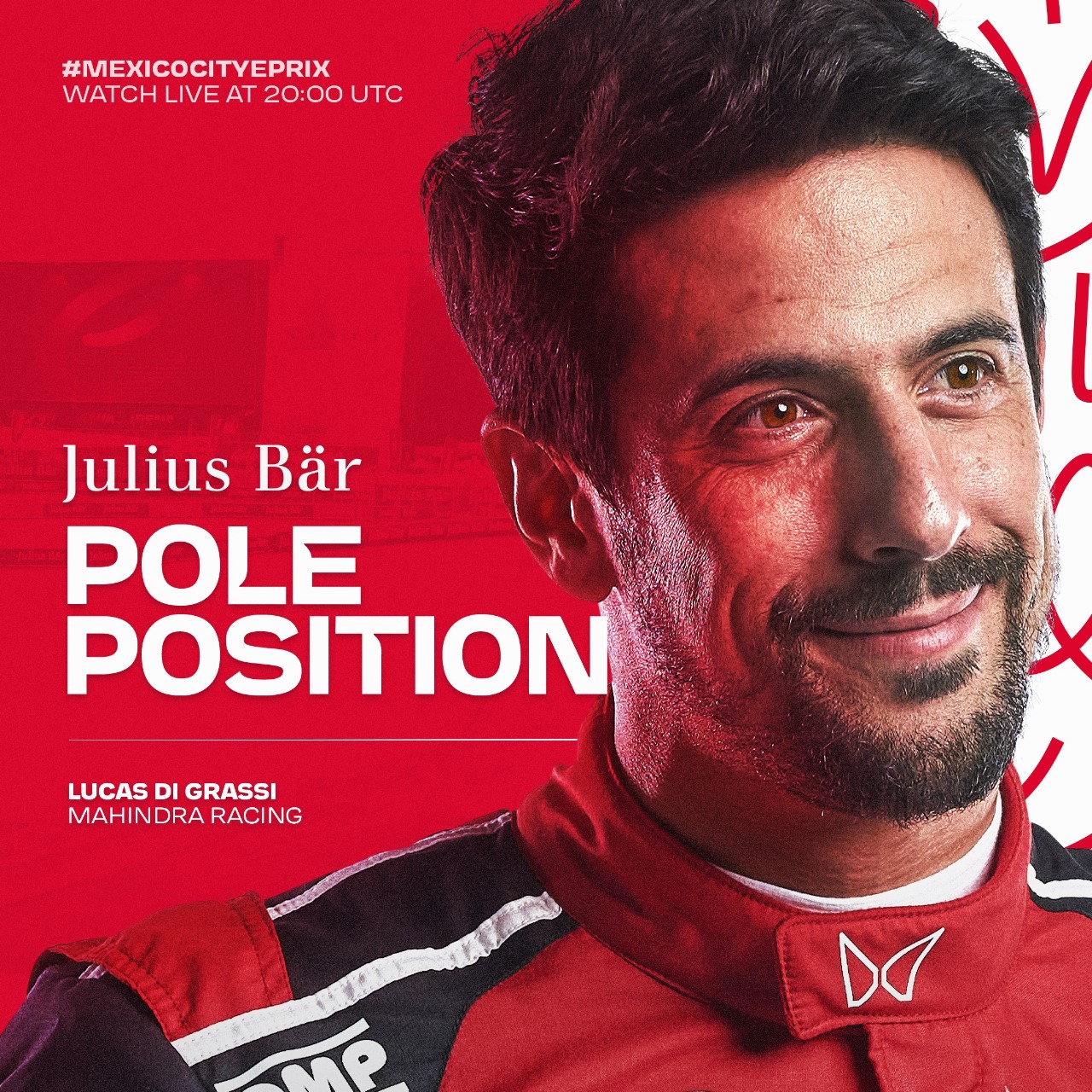 New Mahindra driver Lucas di Grassi won the pole for the Mexico City E-Prix, after Jake Dennis made a mistake in the Andretti Avalanche Porsche.

Both di Grassi and Dennis were fighting hard to keep things in check over what set out looking like a scruffy final effort for both drivers. Ultimately Dennis did fall foul, with a real deep dive into the hairpin at Turn 5 costing him most while the ultra-experience di Grassi kept things under control – the Brazilian’s ultimate 1m13.575s lap time some three seconds up on the Avalanche Andretti driver’s effort.

Rookie Jake Hughes impressed again with the NEOM McLaren driver winding up third on the grid after bypassing Dan Ticktum in a sharp looking NIO 333 in the Quarters – the latter lining up fifth. Fellow rookie Sacha Fenestraz fired his Nissan into eighth after also making the Duels – no mean feat for either of the grid’s new boys with the pack as close as it was. 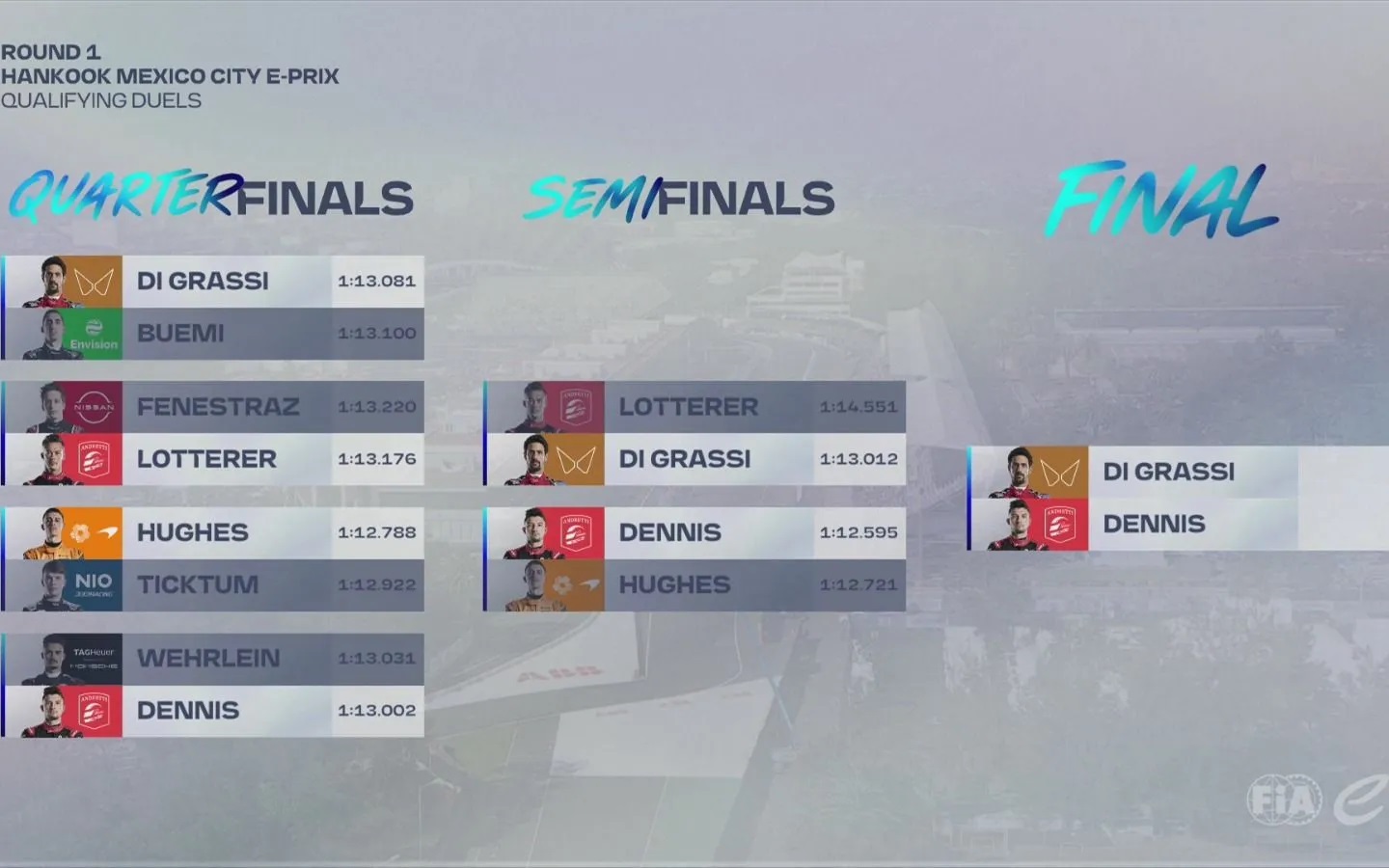 Neither DS PENSKE nor Maserati MSG Racing could count a driver in the Duels – a massive turn up given their benchmark pace in testing. That meant reigning champion Stoffel Vandoorne would have to settle for 14th on the grid, with it all to do. The rate of change in this GEN3 development race since testing just under a month ago has proven incredible.

That Julius Baer Pole Position was di Grassi’s first in 68 races and his first in Mexico, despite striding to two wins in the past here, at Puebla in Season 7 and at the Autodromo Hermanos Rodriguez itself in Season 5. The points for pole also mean its the first time he’s lead the Drivers’ standings since winning the title in 2016/17.

Lotterer vs di Grassi formed SF1. The Porsche driver made a big error with a lockup at Turns 5 and 6. The Brazilian was 0.250s down at that point but all he now had to do was keep it clean. He did, making the Final by 1.539s.

Dennis had to set his time with a damaged front wing after clouting it in the Foro Sol and he and Hughes could not be split all the way around the lap. The battle of the Brits saw Hughes slip at the final turn, wrestling his McLaren around the Peraltada with three chops at the wheel – handing Dennis the advantage and a place in the Final.

Two of the most experienced drivers on the grid squared up once again in the first Duel – with Envision Racing’s Buemi looking to outdo Mahindra Racing’s di Grassi. Buemi was 0-3 in the Quarters and has yet to make it through to the Semis. His adversary here knocked him out in New York City last year.

The Swiss looked like he’d bucked that trend but a poor run through the final sector saw the Mahindra driver progress by 0.019s and placing Buemi eighth on the grid.

The youngest driver on the grid in Fenestraz faced off against the oldest in Lotterer in the second bout. The initiative went the way of the Nissan driver as Lotterer ran deep into Turn 1. The German dragged things back through Sector 2 but there was nothing between the pair heading through the Foro Sol. Again it was incredibly tight, just four hundredths between them and experience, ultimately, telling – leaving Fenestraz seventh.

NEOM McLaren vs NIO 333 and rookie Jake Hughes vs Dan Ticktum made up QF3. The McLaren driver had the measure of Ticktum around the lap to make it to the Semis – the Brit settling for a fighting fifth.

Dennis and Wehrlein faced one-another next. The former drew out a huge 0.4s on the factory Porsche driver by half way. In the end, he squeaked it by just 0.029s after a poor run through the Foro Sol – hitting a bollard in the process. Wehrlein would line up sixth.

With every lap and every kilometer counting at this super early stage of GEN3, there wasn’t a car left in a garage as the session went green. Lotterer set the early running, though about 0.4s down on the ultimate pace we’d seen this weekend as temperatures still relatively low, at just 14 degrees celsius in the air.

That early pace proved to strong for the German, and he went better still at the last to top Group A with a 1m13.405s – he’s strong in the Groups and clearly cool under pressure, having made it through 15 times in Season 8. Buemi followed in the Envision Racing machine, just 0.026s back and di Grassi just five hundredths slower, in third. Fenestraz pulled it out of the bag on debut to fire his Nissan into the Duels – some lap to close the session.

Jean-Eric Vergne didn’t make it, though. The DS PENSKE looked strong in testing and he had topped Free Practice 1 but he couldn’t do enough to progress – despite being only 0.158s shy of Lotterer’s pace.

Midway through the session, Hughes flew to the quickest time of the day so far on a 1m13.366s – smashing Evans’ early timesheet topper. That didn’t last long though with Ticktum again showing the NIO has speed by going top.

As the conquered flag fell, Dennis was the driver to beat. He stayed there with Ticktum also holding second. Hughes and Wehrlein stayed in the mix and progressed, too. No DS PENSKE would make it through – the reigning champion and the pre-season favorites of many with it all to do – as do the testing pacesetters Maserati MSG Racing.