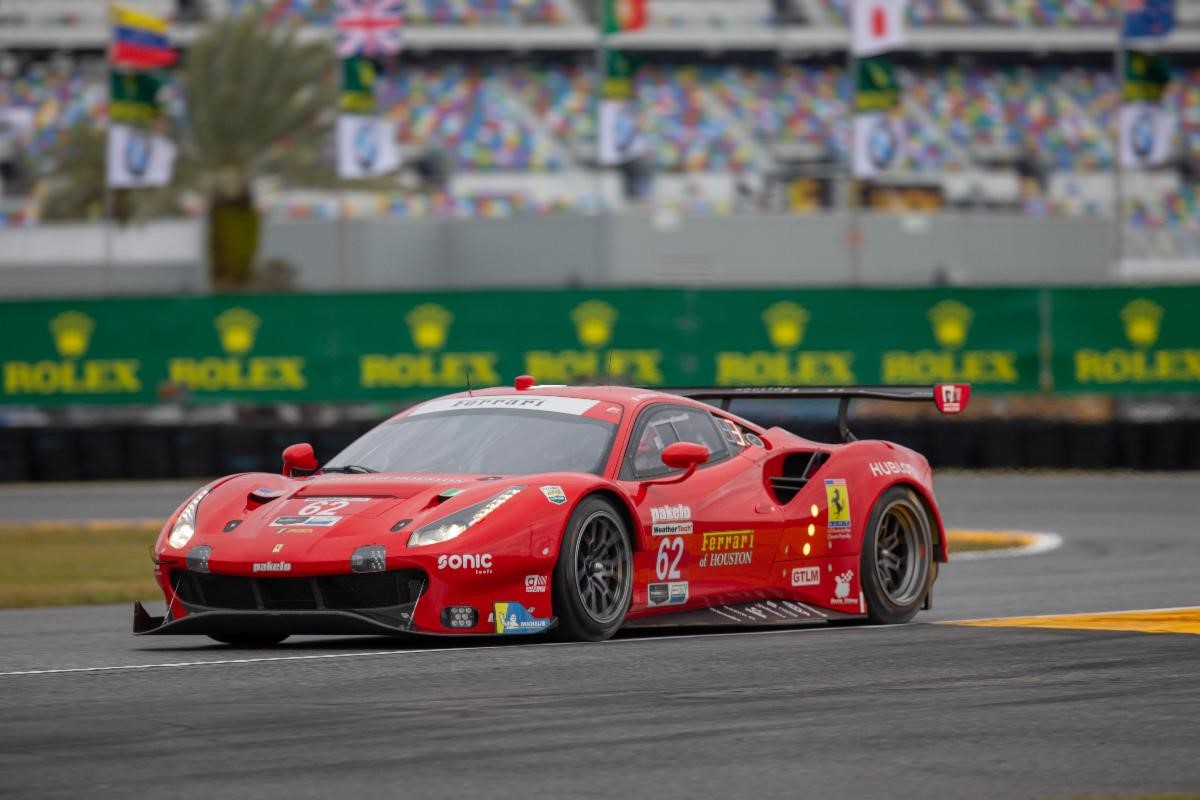 A year ago, there was much fanfare surrounding Oliver Jarvis and the No. 77 Mazda Team Joest RT-24P at the end of Roar Before the Rolex 24 At Daytona qualifying for garage and pit stall selections in the Daytona Prototype international (DPi) class.

The reason for the fanfare was the fact that Jarvis had just unofficially broken PJ Jones’ 26-year-old track record of one minute, 33.875 seconds. When he returned for the race three weeks later, Jarvis officially claimed the track record with a lap of 1:33.685 en route to the Motul Pole Award.

On Sunday, Jarvis’ new-for-2020 endurance racing teammate Olivier Pla unofficially toppled the not-quite-year-old record with a lap of 1:33.324 (137.321 mph). As a result, the No. 77 team, which includes co-drivers Pla, Jarvis and Tristan Nunez, will – for the second consecutive year – have first choice of garage location and pit stall for the 58th Rolex 24 At Daytona on the weekend of Jan. 23-26.

[adinserter name="GOOGLE AD"]“We knew this morning that the conditions would probably be fast with the cold air temperature but some sun, so we were expecting a fast lap time," Pla said. “I’ve been told to push and to push hard so that’s what we did. I have to thank my team for allowing me to because the car was really good. We’ve been working always really hard. We are pleased with that. It doesn’t mean anything, but I think it just showed a continuity of last year."

The race kicks off the 2020 IMSA WeatherTech SportsCar Championship and the four-race IMSA Michelin Endurance Cup. Pla moves over to the No. 77 after sharing the team’s No. 55 Mazda with Jonathan Bomarito and Harry Tincknell, who now have 2012 IndyCar champion and 2014 Indy 500 winner Ryan Hunter-Reay as their co-driver.

In the GT Le Mans (GTLM) class, James Calado led an extremely close session, posting the fastest time of 1:42.685 (124.803 mph) in the No. 62 Risi Competizione Ferrari 488 GTE he is sharing this weekend with Daniel Serra. Calado and the team are coming off a victory in the 2019 WeatherTech Championship season-ending Motul Petit Le Mans at Michelin Raceway Road Atlanta last October.

“The difference this year, especially this year, is that everyone has upped the ante in the Roar," Calado said. “It’s not like previous years where people would hold back. I think it’s pretty equal at the moment and I think that puts us in good stead for a good race.

“I think over the last couple years we’ve had good races as well. We know how competitive GTLM is and the whole of GT to be honest. Looking forwarding to battling with all these guys and having a good race. It’s 24 hours, anything can happen, conditions change especially here, so fingers crossed."

IMSA Radio also will have live coverage throughout race weekend on IMSA.com and RadioLeMans.com, with complete race coverage also airing on SiriusXM Radio.

Tickets for the 58th Rolex 24 At Daytona are available on DaytonaInternationalSpeedway.com.

In his final media availability of the Roar Before the Rolex 24 at Daytona International Speedway, reigning NASCAR Cup Series champion Kyle Busch discussed the differences he has experienced in braking and passing etiquette during his weekend in a sports car.

And in a light-hearted moment, also fire suit pant cut.

While being asked about the ribbing that his teammate in the No. 14 AIM Vasser Sullivan Lexus RC F GT3 Jack Hawksworth doled out, Busch said the other drivers’ fire suits “looked like underwear, long johns," whereas his looked like “a pair of pants, I’ve got the regular boot cut…NASCAR-style."

“Theirs are all wrong, mine’s right."

When it got back to the more serious matter of differences in racing between NASCAR and IMSA, Busch brought up a couple of “interesting" moments on track while navigating traffic.

“I learned from Jack that correct road course driver etiquette is to not ever be on the outside of another guy ‘cause they’ll just force you off," Busch said. “He was actually quite entertained when he ran his NASCAR race at Road America last year that guys would actually give you room on the outside of the corner and not just throw you off on the dirt."

The challenge of passing similarly paced GT cars while staying out of the way of fast-approaching Daytona Prototype international (DPi) cars, all while still maintaining consistent lap times, is one that is not lost on Busch.

“Interesting moments like that that are going to play out the whole time in the race," he said. “You have instances in which you’re faster than the guy in front of you, and just barely because it’s a class car, and you’re trying to pass that guy…but you have these other guys coming and blowing your doors off on some of these corners, that you basically have to forfeit. You can lose a lot of time in doing those things."

Busch also indicated that he’s still learning the braking – as his NASCAR Toyota Camry carries a great deal more weight than the IMSA Lexus RC F GT3, which also has ABS braking that is lacking in the stock car. Throughout the weekend, he felt he started to get a better grasp on the limits in the corners and gained consistency each time out.

One additional surprise came in the visibility on the track during the only night practice session Saturday evening.

“What do you even need the headlights for? There’s plenty of light," Busch said. “I raced local short tracks, some of them dirt…and there wasn’t very much light at those places.

“It seems as though my eyes still work OK."

Busch will return to Daytona later this month alongside co-drivers Hawksworth, Parker Chase and Michael De Quesada for the 58th Rolex 24 At Daytona.

Nearly 40 IMSA Michelin Pilot Challenge teams took their first laps of the 2020 season at Daytona International Speedway this weekend as part of the annual Roar Before the Rolex 24.

Following six testing sessions, Spencer Pumpelly in the No. 31 Team Hardpoint Audi R8 GT4 owned the fastest time of the weekend of one minute, 53.555 seconds (112.856 mph), posted during the Sunday morning practice. Pumpelly returns to Daytona alongside co-driver Rob Ferriol, both of whom shared an Audi for the final three races of 2019.

While the Team Hardpoint car led two of the six sessions, the No. 33 Winward Racing Mercedes-AMG GT4 led the way through the first three.

“Testing doesn’t say much, everyone is getting warm," said Dutchman Indy Dontje, who will co-drive with Russell Ward for the second straight season. “It was good to be back directly on top, but you never know what everyone is doing.

“At least it’s good to be back with the team. Everybody is in a good rhythm. We have actually a lot of the same faces, so I think that is also a really good thing for us because everybody knows what he’s doing and for that reason, I think we came out really good."

In the TCR class, Stephen Simpson broke the two-minute mark during the final practice, topping the class’ charts at 1:59.846 (106.932 mph) for the weekend. While no longer with JDC-Miller Motorsports in the IMSA WeatherTech SportsCar Championship, Simpson remains with the team in Pilot Challenge as the longtime coach for Michael Johnson. The two return in the No. 54 Audi RS3 LMS.

Additionally, the No. 18 TEAM PREMAT Audi, the No. 5 KMW Motorsports with TMR Engineering Alfa Romeo Giulietta and the No. 21 Bryan Herta Autosport Hyundai Veloster N posted fastest laps in class by a session’s end.

The four-hour BMW Endurance Challenge opens the 2020 IMSA Michelin Pilot Challenge season on Friday, January 24. The race begins at 1 p.m. ET and can be streamed live on TrackPass on NBC Sports Gold. The NBCSN television broadcast will air on Thursday, February 6 at 1 p.m. ET. IMSA Radio will also provide live coverage of the race.