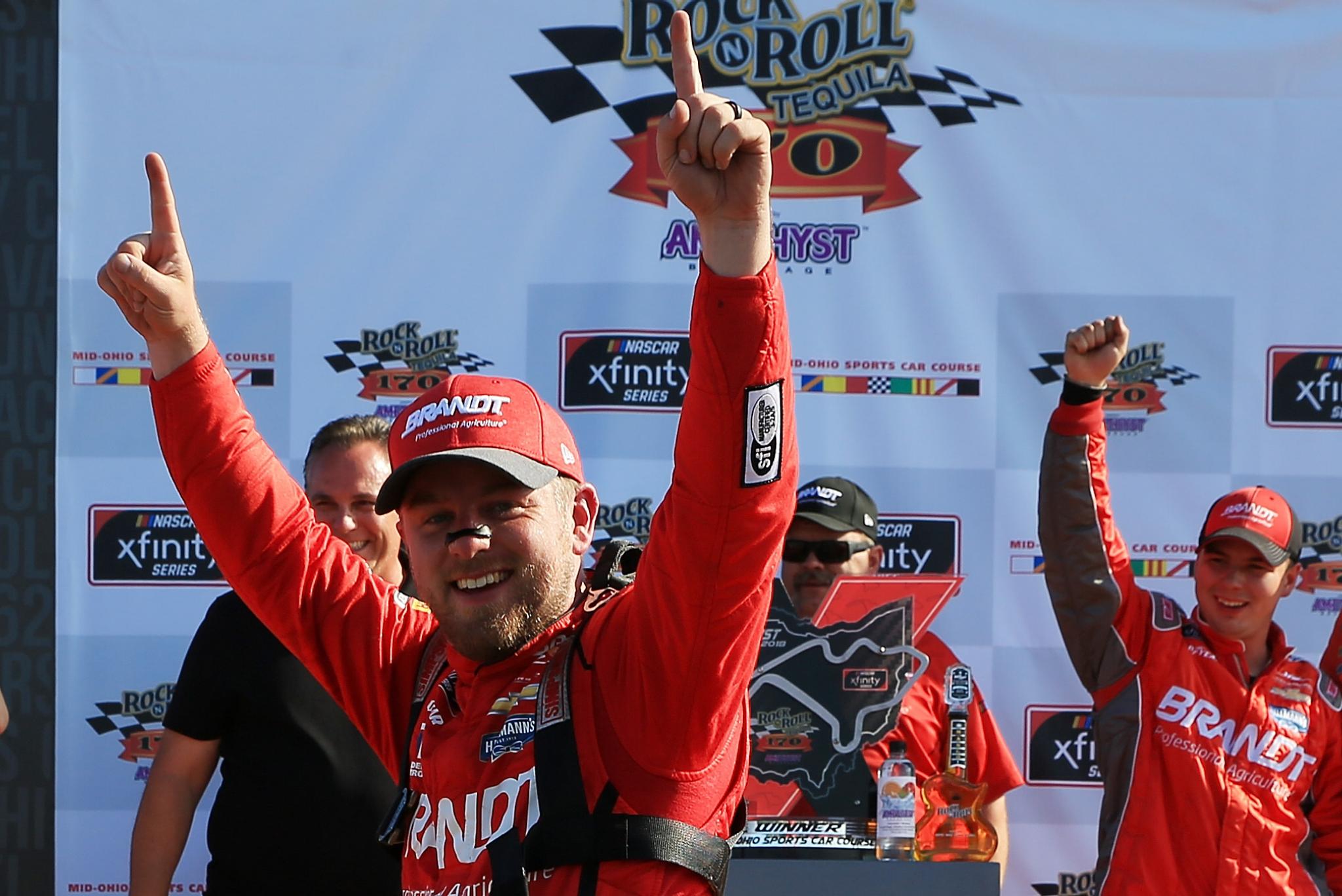 Justin Allgaier pulled off the NASCAR version of a "spin and win" to take the Xfinity Series victory in Saturday's Rock N Roll Tequila 170 at the Mid-Ohio Sports Car Course.

The JR Motorsports driver of the No. 7 Brandt Chevrolet rallied from late-race contact and a spin to pass Austin Cindric with eight laps remaining, claiming his third win of the season and first at the famed 2.4-mile road course.

Cindric's No. 22 Penske Racing Ford won the pole position and led a dominant 59 of the race's 75 laps but his track position gamble out front on old tires couldn't hold off a hard-charging Allgaier, who pitted for new rubber in the race's final caution period with nine laps remaining.

The race was typically "road course aggressive" with lots of bumping and banging throughout the field, particularly in the waning laps. And the final pass for the lead was the result of dramatic back-and-forth, give-and-take between Cindric and Allgaier, who exchanged the front position three times on a single lap before Allgaier pulled away for the checkered flag by 2.095-seconds.

"I thought we gave it away when I went off (course),'' Allgaier said of his mid-race collision with Ford's Cole Custer. "But that pit call (for tires) at the end is what did it. …We've been good this year, but to do it (win) at a road course is even better."

And, he added with a smile, "it was a real barn-burner at the end.''

[adinserter name="GOOGLE AD"] For his part, Cindric was understandably disappointed to come home runner-up because he had clearly been the class of the field all weekend. The 19-year old Indiana-native came just two-seconds away from claiming his first Xfinity Series win, but did lead the most laps and earned a stage win as well.

"It was a big points day for me. .. but too bad we couldn't capitalize with a dominant car,'' Cindric said.

Four-time race winner and series points leader Christopher Bell ran as high as second place at one point, but heavy contact between him and veteran Elliott Sadler in the closing laps spun Bell's No. 20 Toyota around and caused a final lap catch-up session. He ended up 11th and still holds a 17-point advantage over Hemric and Elliott in the standings with four races left to set the Playoff field.

IMSA standout and former IndyCar driver Katherine Legge finished 30th, having to retire her car 10 laps from the end with engine problems. She is scheduled to compete with the Xfinity Series again at Road America in two weeks – as is NASCAR Hall of Famer Bill Elliott, who is coming out of retirement for that race.