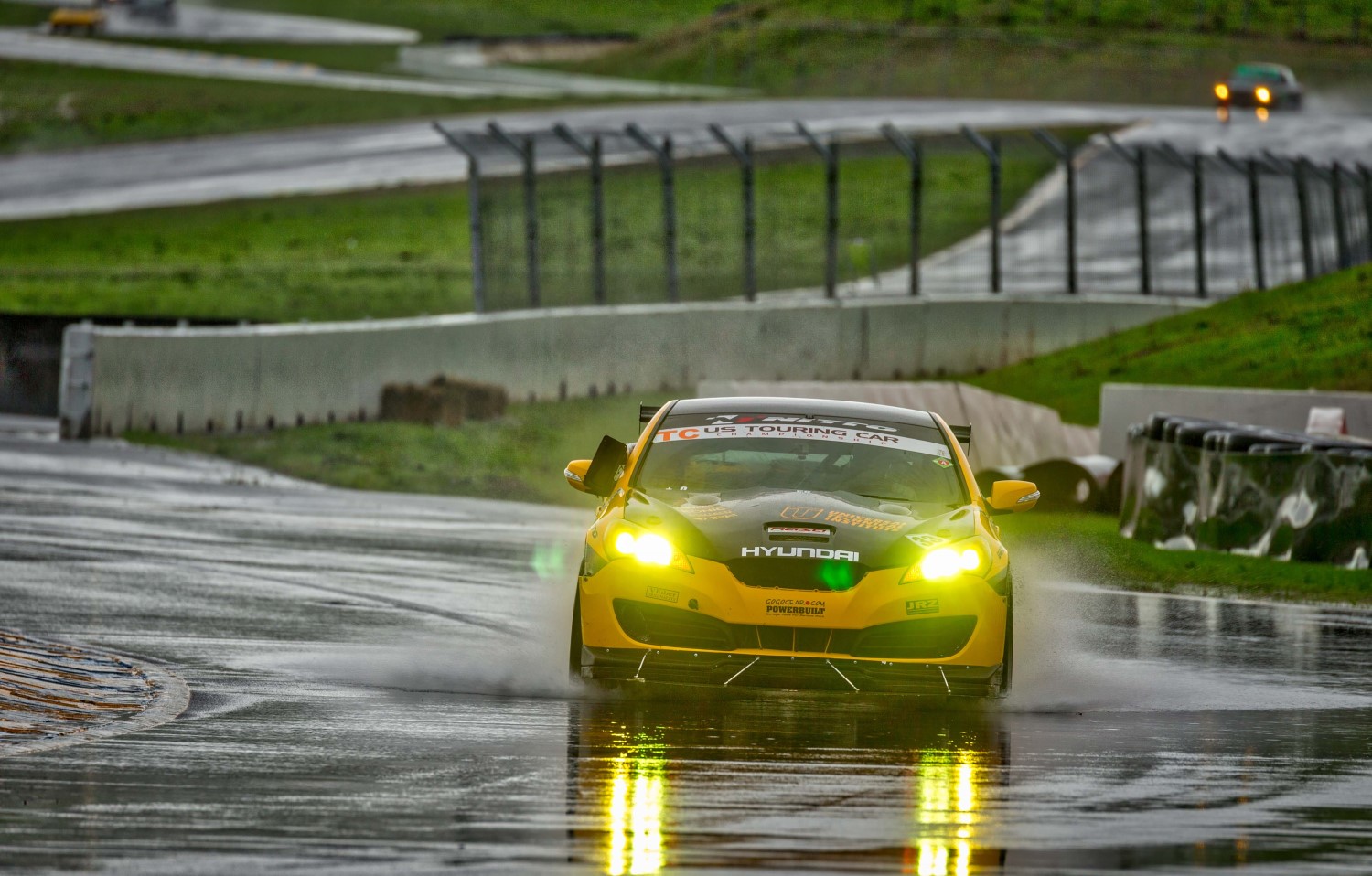 It was a very wet weekend as huge puddles from sudden downpours made driving treacherous. The first qualifying session which was on Saturday was just damp but several front runners missed it and the teams knew that Sunday’s forecast called for more rain so it was imperative to set a good lap time.

Sunday’s qualifying indeed was wetter and the times were around 30 seconds slower than pole time but suddenly the rain stopped and the sun came out which quickly dried the track. Times started dropping and suddenly the teams that stayed in the garage seemed nervous about their decision.

But the session was just not long enough as the track was drying and the Saturday times held. One of the drivers said afterwards, "We just needed a few more laps and we could have beaten the Saturday times. We just missed it by about five minutes."

Once it was time for the race, the track was completely dry but small sprinkles kept appearing. Some of the teams gambled that the rain would return and went with a wet set up thinking that they would have the upper hand in a few minutes. Others went for intermediate set ups while some went for totally dry set ups. It was obvious that nobody really knew what was going to happen.

At the start, it was Brad McClure in the BTM Motorwerks Porsche 911 that took the lead with his arch enemy Doug Makishima giving chase in the SanDisk/MCS BMW M3 followed by Roger Eagleton in the GoGoGear.com/Konig Wheels BMW M3.

While the trio was battling for the Super Touring, behind them was a great fight for the Touring lead with Michael Shawhan in the BTM Motorwerks BMW 330i followed by Karl von Beckmann in the Hawk/CCI/Sparta BMW M3 and Gary Sheehan in the GoGoGear.com/Konig Wheels Hyundai Genesis Coupe.

Perhaps the best battle on the track was in the Sportsman class where Larry Bani took the lead at the start with a great launch in the GoGoGear.com/Konig Wheels BMW M3 over Thomas Pitre in the Pitre Racing Acura Integra. Bani was carrying over 200 pounds of REWARDS weight due to his several wins during the season so he had to work very hard to keep Pitre behind.

"Pitre was much stronger in the tight sections so I had to focus to make sure I did not leave an opening for him," said Bani after the race. At the end, it was Bani over Pitre by only 0.2 seconds. Newcomer Victor Ng finished in third place in the Domport Auto Body Mini Cooper S.

Makishima was pressuring McClure when McClure’s car suddenly bobbled allowing Makishima a way through. McClure ended up pitting for a flat tire right after that and ended up finishing the race but the flat tire already had cost the Porsche driver the victory in Super Touring.

Shawhan looked like he was going to cruise to a victory but suddenly Karl von Beckmann was charging hard and lapping a second quicker, perhaps due to the different set up. Von Beckmann was closing in quickly but just ran out of time but 0.2 of a second at the finish. Cruel reality put von Beckmann that close to scoring his first win. Finishing third was Sheehan in the Hyundai.

There is only one weekend of racing left in the 2016 season but that weekend is a doubleheader so anything can still happen. The teams head out to one of the favorite tracks on the schedule at Thunderhill Raceway, where the weather can once again provide challenges.