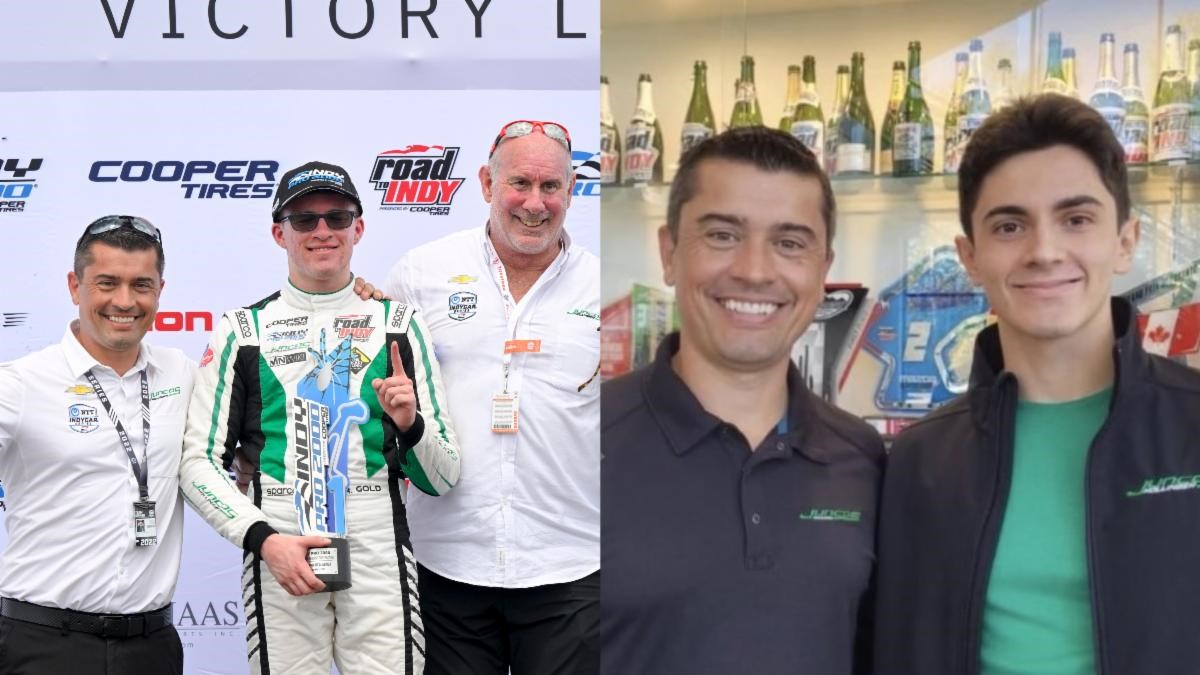 Juncos Hollinger Racing announced Reece Gold and Matteo Nannini as its INDY NXT by Firestone drivers for the 2023 season.

A former two-time winner of the Indy Lights Championship (now INDY NXT), Juncos Hollinger Racing (JHR) is returning to the primary INDYCAR feeder series after a year pushing for success in other racing categories.

The team made headlines in 2022 through the outstanding performances of rookie Callum Ilott in the NTT INDYCAR Series, while also engineering Gold to vice champion status in the Indy Pro 2000 championship, with the team also becoming the 2022 Indy Pro 2000 Team Champions.

With momentum on their side, Juncos Hollinger Racing owners Ricardo Juncos and Brad Hollinger have taken the decision to re-enter the INDY NXT arena in the hope of adding to the team’s impressive record of two driver championships, 18 wins, 30 podiums and 16 pole positions in the category.

The driver pairing of Gold and Nannini is one that blends immense US and European racing experience.

Gold, who will drive the #76 Ticket Clinic car, joins the INDY NXT grid after spending the last two seasons earning a formidable reputation in the Indy Pro 2000 series where he scored five wins, 14 podiums and seven pole positions.

The 18-year-old Miami native feels he’s ready to challenge himself in INDY NXT and is looking forward to working with JHR for the third consecutive season. He said:

“I am happy to be staying with Juncos Hollinger racing for INDY NXT in 2023. I have had two great seasons with JHR in Indy Pro 2000, with this past season being our best, picking up 4 wins and 2nd in the championship. We have already shown great progress in testing for 2023 and I am looking forward to the season. Thank you to The Ticket Clinic and everyone at Juncos Hollinger Racing for their support”

Meanwhile, the 2023 season will give Matteo Nannini his first taste of single-seater racing in the US. The Italian-Argentinian impressed Juncos Hollinger Racing during a Chris Griffis Memorial Test at the Indianapolis MotorSpeedway, and has now committed to driving the team’s #75 machine.

The 19-year-old brings huge experience to his new team having competed in the FIA’s Formula 3 and Formula 2 championships. As well as being a race winner and podium finisher in F3, he’s also the former F4 UAE Champion.

He said: “I am very excited to have confirmed with Juncos Hollinger Racing after the positive tests last year. It’s a great opportunity to be able to race in America and I don’t want to waste it. I have great respect for Ricardo and I’m sure we could do great things together. INDY NXT is the best springboard to continue my journey towards INDYCAR. I thank the people who are helping me especially my business partner for making this possible.”

INDY NXT is the proving ground for youngsters with an ambition to race in the elite NTT INDYCAR SERIES. Gold and Nannini will contest 14 races on a variety of ovals, street circuits and road courses during 2023.

The first round of the season will be held on the Streets of St. Petersburg, Florida (March 5).

Joint team owner, Ricardo Juncos, is looking forward to getting the new season underway in a championship that has attracted new teams and a host of fresh driving talent.

He said: “First of all, I’m so excited coming back to INDY NXT after a year away in 2022, which allowed us to focus on our INDYCAR program as we became a full-time operation. After 14 years we decided to close our Indy Pro 2000 program, to allow us to create a solid INDY NXT program with two really good drivers, and to expand to two cars in INDYCAR. We achieved many wins and two championships over six years, in what was previously known as Indy Lights, and we are excited to come back and continue building on those achievements.

I’m really excited to welcome back Reece Gold, after two years with us in Indy Pro. We now feel like a family. He’s a very young, talented driver with a bright future ahead of him. We’ve already done a few pre-season tests with him, and he is showing a good pace and good speed, so we are looking forward to a very successful year with him. We’ve also signed the talented young driver, Matteo Nannini, who comes with a lot of experience in Europe, after racing in F3 and F2. He tested with us in October 2021, so we have some experience with him in the car. Between Reece and Matteo, I think we are going to have a very solid line-up of drivers to come back into INDY NXT to continue our past successes.

We are looking forward to building our junior INDYCAR program, which is something unique and something good to have, since not only INDY NXT is growing but also INDYCAR. The INDY NXT pre-season car count has around 17 cars participating in some pre-season tests, so I’m very excited to come back to the series. INDY NXT being under INDYCAR and Roger Penske Promotions is great for the sport, great for the series, and is what we were looking for. You can see the results after one year, being back at almost 20 cars.

I’m looking forward to a great 2023 season, and I want to thank the drivers, the driver’s sponsors, and their families for the trust in our team.”

Brad Hollinger, the team’s second owner, believes INDY NXT will give Gold and Nannini a fantastic platform on which to prove their credentials as potential NTT INDYCAR SERIES drivers of the future.

He said: “We are so excited to announce Reece and Matteo into our driver lineup for 2023. “Having Reece back for another season is great news for the team and we know he can carry on the momentum and promise he showed last year to capitalize on some great results. Introducing Matteo, another great young driver, to the team will help us achieve great results in a highly competitive field. I want to thank both of them for the commitment to our growing team and I can’t wait to see what the 2023 season holds for us.”